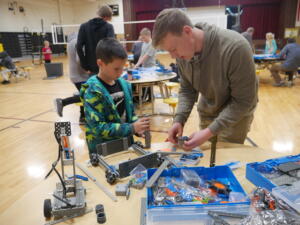 Spartan Robotics began this year as a way to encourage students to engage in collaborative problem solving using the engineering design process.

In the club, students use the VEX IQ platform to plan, design, and program a robot for competitions.  This year the game the students are playing is called Spin Up and involves students collecting a hockey puck style disks from one of five different dispensers, and then shooting them to the other side of the play field for different point values.

During competitions, student teams work in combination with another robot during morning qualification rounds to score the most points possible.  During the rounds, two students have to share driving responsibilities and all team members will have an opportunity to drive.  Their morning qualification scores allow them the ordered rights to prove their afternoon rounds partners during the final rounds of each tournament.

Additionally at tournaments, each robot team will have three tries to score as many points possible on the field by themselves in both driver controlled and fully autonomous modes.  These scores make up their Skills Score ranking where they can be compared to other robot teams across the world participating in the same challenge. 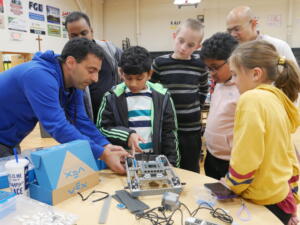 Teams will compete in two VEX IQ tournaments this year, one on November 5th and a second at the end of January.  At tournaments, students can win awards to qualify for the State Championships in Appleton, WI in February. Each team is interviewed by judges at the tournament and submits a design journal explaining their design process.

It was funded as a collaborative effort between St. Joseph School, grants from the Education Foundation of Rice Lake, and registration fees charged to each family.